Simply saying, the data we have obtained suggest the following preliminary conclusions that you can post on your research page:

UV spectroscopy studies performed in our laboratory indicate that passing water through the The Vortex Water Revitalizer™ does result in certain changes in its structure, probably towards the formation of clusters.

The most prominent evidence for this fact are obtained using very diluted solutions of benzoic acid since this substance is a highly sensitive indicator for these UV spectroscopy measurements (its solubility and consequently UV absorption / transmission performances strongly depend on the structure of water in which benzoic acid is dissolved).

Water is an intrinsically integrated object and revitalizing of even a small part of it, results in a similar but certainly less strong effect in all the water system being a whole before this procedure. 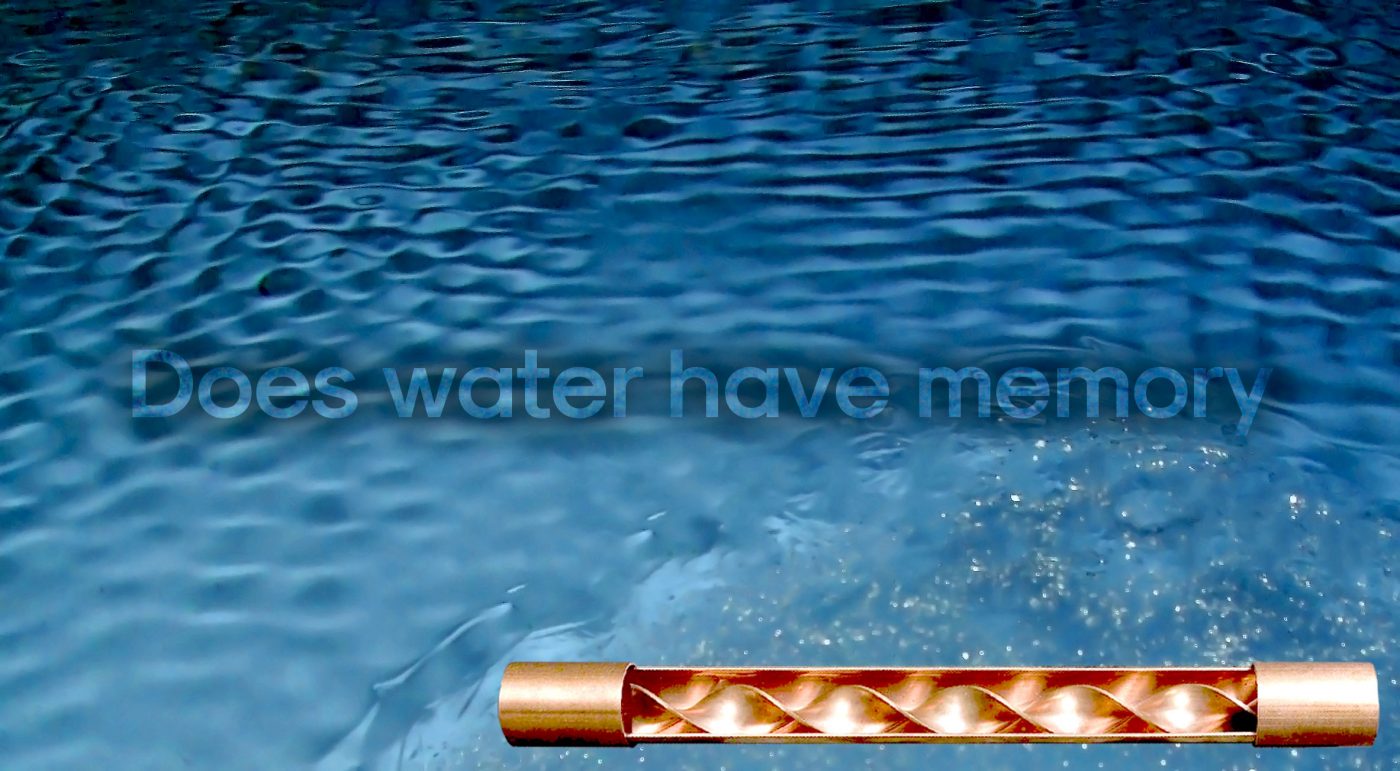 In the book Environmental Medicine by Dr. Michael Treven and Peter P. Talkenberger, is an interview with the renowned German physicist Dr. Wolfgang Ludwig. Dr. Ludwig talks about water’s memory and water as an information carrier. Below are some informative and thought provoking excerpts from the interview:

“All life processes are directly or indirectly connected with water, therefore it entitles water to have a very high priority and positioning in the environmental situation,” according to Dr. Ludwig.
Question: “Dr. Ludwig, you have formulated the thesis stating that water has a memory like an elephant. What exactly does this statement refer to?”
Dr. Ludwig: “This statement refers to the following: water has the ability to transfer information, once it has obtained it, to other systems such as living organisms. Before we illuminate this in detail, we will recall some of the basic characteristics of water.
We know our organism is made of 75% water. We could survive several weeks without food, but without water, we can only survive a few days.
When we drink poisonously charged water we are thereby creating, as the years go by, the basis of diseases and/or a weak health condition in general. Around the world, water is often chemically and mechanically “purified” with the intention of ridding the water of as many poisonous substances as possible. This is not even in its own limited way sufficient. If we for instance take a look at the limits for nitrate, they might be pretty harmless to adults, while to infants they can be very dangerous. There is no political or scientific agreement upon the chemical quality of fresh water as it ought to be.

How Good is Our Drinking Water?

Question: Let us be very specific here. Water as an information carrier! What does that mean? To what degree of realization of this has the modern science of physics arrived to at this date?
Dr. Ludwig: “What few humans know is the following fact: detrimental/poisonously charged/burdened water, as we have today in our wells and municipal water supplies, rivers, lakes, underground water, etc., is often polluted with substances such as lead, cadmium, nitrate and an impressive variety of other detrimental substances from households, agriculture and industry. All of this water can be chemically treated with the purpose of purifying the water and eliminating bacteria etc., but after the water treatment has “purified” the water as far as the “science of yesterday” is concerned, the water still carries certain electrical frequencies, oscillations in specific frequency bands (wavelengths). By further analyses, these can be tracked precisely to those detrimental substances which were detected in the water before treatment.”
Even after treatment and purification of water, it still contains certain unwanted signals from these poisonous substances which depending upon their wavelength can be destructive and/or injurious to our health.”

The Connection Between Cancer and Negative Water

Interviewer: That was a very serious statement! It indicates that our fresh water is possibly to a great extent injurious to our health in spite of all the efforts to cleanse, and purify it, both with official water treatment and in our own homes (reverse osmosis, chlorine filters, etc.), because of the stored data/information from these substances which still remains in the water. Well, does this mean that heavy-metal polluted water, after a thorough water treatment, will still transfer the heavy metal’s poisonous information to the human organism?

Dr. Ludwig: “This is exactly what it means. Certain electromagnetic frequencies of heavy-metal polluted water have been found in cancer tissue as well. Let us take the frequency 1.8 hertz, which is a very low frequency. We have been able to confirm that fresh water in a certain major German city carries this 1.8 hertz frequency. Mind you, that water was distilled twice before this measurement!
From this we can draw the following conclusion: After any cleansing -purification -chemical -treatment -filtration or even after distillation, the pollutants’ harmful information – the electromagnetic frequencies/oscillations can be transferred to the human organism. They are there, measurably present in the water molecules both before and after any of the conventional treatments. So even when our fresh water is chemically purified it is still physically pollutant-information-charged both before and after any conventional treatment.
It is not the chemical substance which affects the human organism when you drink this water, it is the undesirable frequencies.”

Dr. Ludwig continues: “Water which has once been exposed to pollutants is dead. Even the most intensive and modern sewage treatment facilities cannot revive it. It is energetically dead and it contains no useful information. Biologically valuable water must contain certain useful frequencies in order for the human organism to benefit from it.
In spite of these facts, scientific research institutes are not even remotely aware of these phenomena and are not taking them into consideration. Not yet anyway! We must remember that the materialistic view of the world only deals with, let us assume, one billionth of reality.
In the area of energetic reciprocal action or interaction between material and biological systems, there has until this day only been very limited research. The few results this avant-garde scientific research has found have, as strange as it sounds, been known by humans for thousands of years, especially by indigenous nations like Native Americans.
In accordance with this, we know from geo-biology about places with a special force or power, where special plants grow, which do not grow in other places. Physical measurements have shown the existence of a lower level than normal of gamma radiation in these power-spots. But this is the only known parameter out of a wide spectrum of factors, of which we do not have any inkling yet.
It would be an extreme violation of the truth if we were to claim as a civilization that our scientists have researched and explained all of Nature’s phenomena and wonders. We might know of a tiny bit of what is really going on. A small part of this is our scarce knowledge about the abilities of water and the influences of water upon the processes in living organisms.”

Dr. Ludwig: “One thing is for sure, our drinking water ought to be subjected to a precise spectral analysis, and one should avoid drinking water which is biologically dead or even detrimental. This should not be based upon some limit value set by legislation from the government, but instead it should be determined by a spectroscopic analysis covering all of the frequencies from zero and into the megahertz band (spectrum).”
Dr. Ludwig continues: “Environmental medicine would do very well incorporating into its scientific research these physical abilities within the water and the activity of water in the human body. Physicians ought to strive to set up a research program, which would seek to find the intimate connection between water and living organisms.
Discussion of the so-called limits (the government approved standard content of substances) would then reach a totally new dimension: namely the definition of living water. In other words, water which is useful and only useful to life-forms; which is totally different from just drinking water, which is germ free, contains a low level of nitrate, or water where lead and cadmium has not exceeded the so-called limits (the government-approved standard content of substances), and therefore subsequently are considered harmless!
Given the background of all these new and old realizations and acknowledgments, our responsibility is not to look for new government/science-approved so-called harmless limits for the content of various poisonous substances. No! Our responsibility is to set levels in a completely different area of research: namely where we are talking about life and not matter.
So this is a very important quality of water to be aware of in our use of water in general – it’s ability to carry information.”

Part of the scientific community has researched the abilities of water to carry information in an organized fashion. A decade or more ago, I read an article in some scientific magazine, about the ability of water to store data in an organized manner just like a hard drive on a computer. The article stated that the scientists were anticipating a drop of water to hold vast amounts of data. Since then other scientists has researched how to utilize water’s ‘memory’ to provide for further applications. At this moment I will only provide you with the encouragement to google these terms: water’s memory, water memory, Russian, water as a carrier of information/data etc. You will find both very real research and I am afraid you will find a lot of pseudo research and marketing hype as well. You be the one to discern for yourself.

As an indicator of water’s ability to hold and recognize information I am sharing this photo with you from a swimming pool that is being treated with the Vortex Water Revitalizer. The structure of the surface water is set into motion by both the water from the incoming jets into the pool as well as the wind which is caressing the surface of the water. Wind by the way is also moving in vortex like swirling movements, which can be seen if you put smoke up in an airfield from which an airplane takes off. You can of course also just observe how autumn leaves are swirling around in the wind while falling.

If you have a pool I like you to observe how the surface looks like when the wind is blowing on its surface and take photos of it to compare with the photo below. The photo below is to inspire you and I am not making any direct claims. I simply want to trigger the speed of your thought.

It looks like the Vortex Water Revitalizer is designed in harmony with the Cosmos we are part of.

The book: ‘Electric Universe’ by David Talbot and Wallace Thornhill

explains and shows how the universe is working and keeping itself together not based upon neither gravity or nuclear activity in planetary bodies like our local sun; but rather by electric dynamics. Click here for more.

In the book you will find a photo of the double helix spiral formation of energy emanating from the sun in our local solar system.

Dr. Emoto in Japan has done interesting research into how water can be influenced by both sound and written words. The validity of his research should not be based upon the levels of today’s science. It should be looked upon as a doorway into the deeper nature of water. One of his books is called: ‘Love thyself’. Google it. Once you read it, you will understand its title.

If you are a scientist and you have access to research facilities in any area related to water, I ask of you to contact me. For one, I can imagine university students, who would be happy to explore the astonishing aspects of water’s behavior reflected in how we treat it. How do you as a scientist think water will respond to be treated with a compressed but natural process of vortex induced implosion?